From Darkness to light: The road from Damascus

The Oxford Cultural Collective is proud of its long-term relationship with the Ratiu Center for Democracy in Transylvania, Romania, a non-governmental trust that supports public participation, youth engagement and cross-cultural communication. Donald Sloan recently met with Mataz Alzari, a chef from Syria who will be preparing the opening dinner for the Ratiu Dialogues on Democracy on 19th May 2019. The dinner will be a tribute to Syrian refugees who have re-built their lives in Romania and will acknowledge the agencies that support refugees’ successful integration into Romanian society.

Mataz Alzari has an infectious positivity that belies the many challenges he and his family have faced in recent years. Within minutes of our first meeting at the headquarters of the Ratiu Center for Democracy in Turda, Transylvania, the Syrian-born chef is joking about my inability to communicate in Romanian despite me having been a regular visitor for ten years. He has lived in the country for less than two years and is already speaking the language fluently. Mataz has arrived laden with ingredients, ready to prepare dinner for a small group of friends and colleagues.  This will be a practice run for an important event that he will oversee – the opening dinner of the forthcoming Ratiu Dialogues on Democracy conference, a gathering of around 150 guests who share an interest in issues facing Romania and its neighbouring nations.

Today also gives me a chance to get to know Mataz and his wife Yasmine and to learn about their journey from Damascus to Cluj, the university city in Transylvania that is now their home.  Their journey was defined by uncertainty, separation and fear. Yet despite their many harrowing experiences, their story is life-affirming – a testament to their determination and resilience and to the character of those who continue to support them as they build a new life in Romania.

Mataz had a happy upbringing. Influenced by memories of his close family sharing plentiful quantities of freshly-prepared food, he decided early in life he wanted to be a chef. After completing his high-school baccalaureate and enduring two tough years of compulsory national service, his chef training could begin. Specialising in food that represents his own cultural background, Mataz built a successful career, first in a restaurant in a cosmopolitan neighbourhood in Damascus and latterly as a private chef for a wealthy family.

Life changed irrevocably for all Syrians in March 2011 when widespread anti-government protests were met with severe retaliation: a situation that rapidly escalated into brutal civil war. Mataz paints a vivid picture of the consequences of war: displacement and death through bombing; widespread sickness that particularly impacts children; and embedded despair. For him and Yasmine, a turning point came one night early in 2012. Woken by the deafening sound of helicopters flying above their apartment, they realised their block was under attack. Wrapping their two-year-old daughter in her bed clothes, they fled. They were able to join his parents who lived in what was still a safer area of the city where, despite the dangers, they stayed for the next two years. 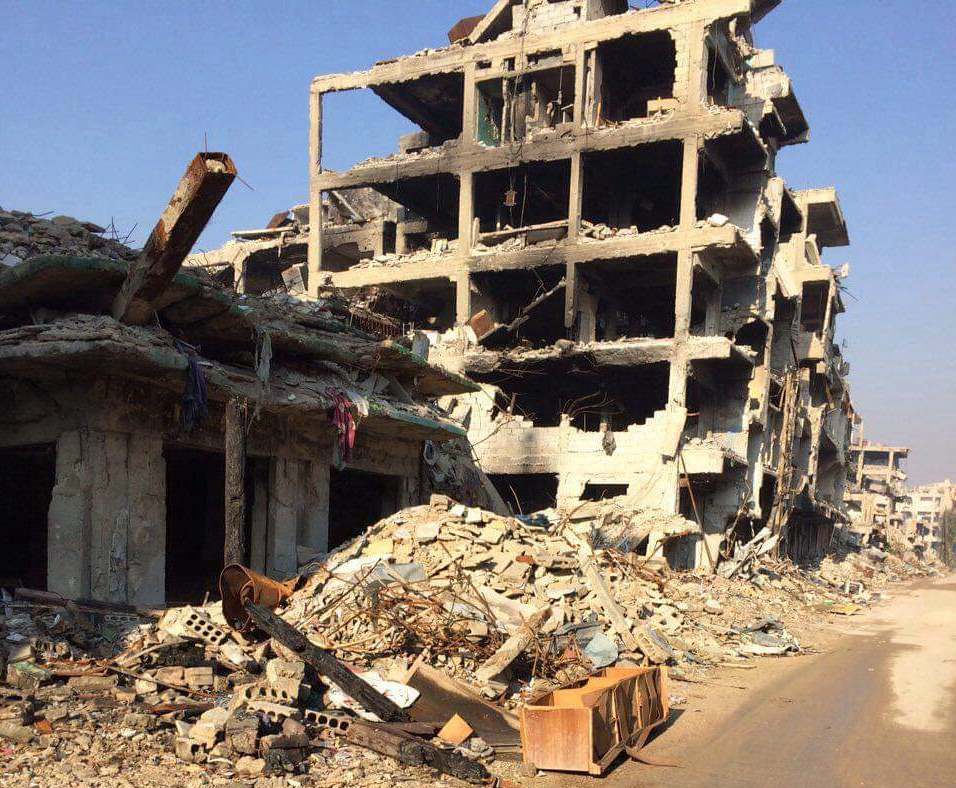 The area in Damascus in which Mataz and Yasmine lived, post-bombardment (courtesy of Mataz’s brother).

On 10th September 2014 Mataz received a call from the police instructing him that he had to join the government forces. As a compassionate man who fervently believes in our common humanity and whose number one priority is his family, there was no choice but to leave Syria. So began his journey.

His intention was to make it to Turkey, where he would apply for legal status and be joined by Yasmine, their daughter Widad and baby son Yahya. After travelling to Istanbul, via Beirut, and inquiring about the process for securing permission to remain, it became clear that this ‘official’ route was not an option. He was forced to live and work illegally, moving between various locations over a period of two years. Having saved some funds, he travelled back to Lebanon, where he met Yasmine and the children. Joined by approximately 1000 other Syrians, they headed north, on foot, for the 200-mile journey back to Turkey. It was deemed safer to walk at night to avoid the attention of the Syrian police. From the border, they moved on to Istanbul, where another period of illegal work followed, this time in a factory making fridges. As well as covering the rent on a two-bedroom apartment, which they shared with another family, Mataz and Yasmine were saving to pay for the only available route to Greece – via the Mediterranean, facilitated by human traffickers. They had to pay $4800 to those engaged in this disgraceful trade, to join around 50 others in a large inflatable dingy, to make the perilous four-hour crossing. It was a measure of their sheer desperation, and their hope that something more positive lay ahead, that they were willing to make this journey with their young children. As they approached the Greek border their dingy was tossed around uncontrollably in the wake of a large cargo tanker.  Mataz believes that “God was with us that day”, as somehow they made it to land.

From Crête, where they received papers that confirmed their refugee status, they were taken north to Macedonia to be housed in a refugee camp. The conditions were basic. As Mataz says: “This was no life. We had little food and we were dependent on the International Organisation for Migrants (IOM) and the Red Cross for essentials.” It’s a measure of his determination that once again he secured employment on an illegal basis, washing dishes in a Greek restaurant, which enabled them to rent one room in an apartment. He supplemented his income by preparing and selling Syrian food. 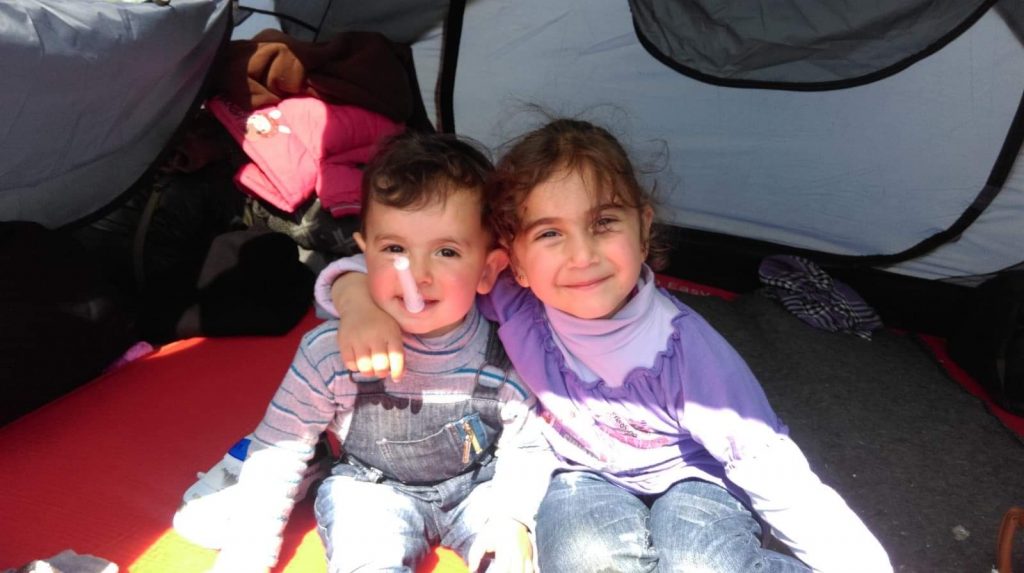 Mataz and Yasmine’s children, Yahya and Widad, in the refugee camp in Macedonia

After nine months, and by now exhausted, Mataz was invited for an interview to discuss where he and the family could travel to for settlement on a more permanent basis.  For so long they had dreamt of a new life, possibly in Germany, France or Sweden. It came as a shock when they were told that the one and only option was Romania. “Oh my God”, was his reaction, “I have travelled for three years and they are sending me to Romania. I don’t even know where it is.” They went to Bucharest and then on to Radauti, a small town in the extreme north of the country, near Suceava, to a refugee camp that acts as a stopping off point before moving on to a more independent life. With the assistance of an established Arabic network in Romania it took Mataz just one week to secure a job in a Lebanese restaurant and an apartment in Cluj.  He made contact with the League for the Defence of Human Rights which provided comprehensive support, including some money, translation of official documents and Romanian language lessons. For Mataz and Yasmine, the assistance they received from LADO characterises the welcome they have received in Romania more broadly. 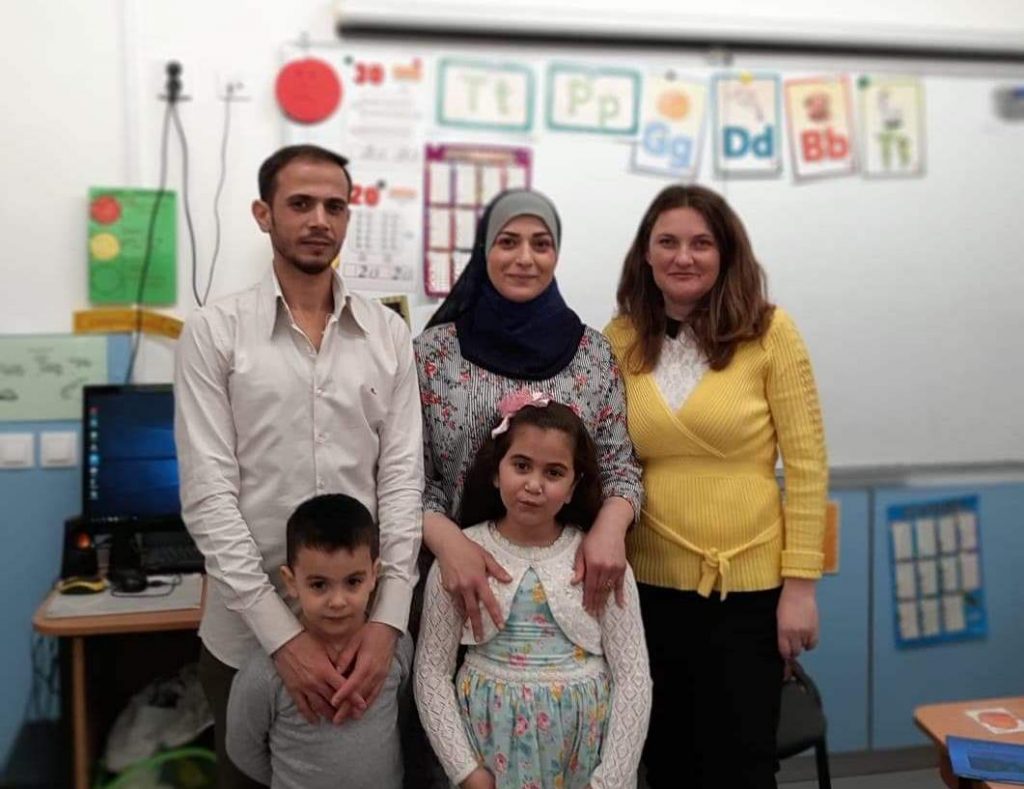 Happier times: Mataz and Yasmine with their children at school in Cluj.

After their trials, Mataz and Yasmine, with their children Widad and Yahya, are rebuilding their lives. Psychologically, they have managed to leave behind everything that happened to them on their long journey from Damascus to Cluj. They don’t forget their life in Syria, nor what those in the country continue to face. They keep in touch with family and think often about their friends, but they prefer their life in Romania. The children have access to a high quality kindergarten and an excellent school, and as life progresses they will have many exciting opportunities, including the possibility of going to university. They are also aware that Syrians who have been relocated to other European countries face prejudice and discrimination, which thankfully they have not experienced.  They are treated as equals by their Romanian hosts, who they describe as “having a good soul”.

I finish my discussion with Mataz by bringing him back to the Ratiu Dialogues on Democracy, at which he will prepare the opening dinner for 150 guests who represent many different nations. Does he have a message for those he will be meeting?

“We, the Muslim Arabic people – we are good people. In other nations we are misunderstood. In the end people of all countries and religions share a common humanity and we are all seeking to make a good life. To do this we must respect each other.”