Dr. Jessica B. Harris, Patron of the Oxford Cultural Collective, is Lead Curator of a major exhibition being staged by the Museum of Food and Drink, at the Africa Center, Harlem, New York City. African/American: Making the Nation’s Table is the first exhibition to celebrate the countless black chefs, farmers, and food and drink producers who have laid the foundation for American food culture —recognition that is long overdue.

“The goal of African/American is really two-fold; to create a deep appreciation for the profound impact that African Americans have had on American cuisine, and to bring diverse audiences together around a table to celebrate our shared culinary identity,” said Peter J. Kim, former Executive Director of the Museum of Food and Drink.

Harris, widely considered to be the world’s foremost expert on the food of the African Diaspora, commented: “In the 400-plus years since enslaved Africans first arrived on the North American continent, African Americans have been the bedrock of American cuisine. For centuries, we worked the fields, harvested the crops, wrote the recipes, brewed the beer, distilled the whiskey, cooked the food, set the table, served the food, cleared the table, and emptied the chamber-pots. In so doing, we made this nation’s table — and our influence continues today.” 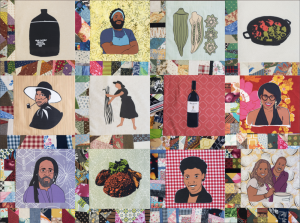 Visitors to African/American first encounter the massive Legacy Quilt, composed of 406 blocks, each one representing one African American culinary innovator. The quilt was hand-stitched by Harlem Needle Arts, a diasporic quilting collective based in Harlem, using historically appropriate fabrics. Visual artist Adrian Franks, a multi-hyphenate creative who has worked with Spike Lee and Michael Jackson, produced the illustrations for the quilt.

While the Legacy Quilt shows the breadth of African American contributions to American food, the exhibition is centred around four particular stories, one for each of the four centuries that have passed since the first arrival of enslaved Africans in North America: 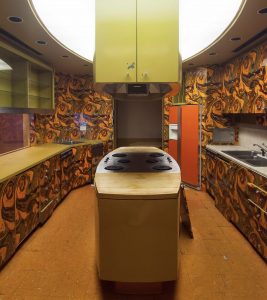 Anchoring African/American is the Ebony Test Kitchen, the psychedelic staple of black home cooking in the mid-20th Century from which Ebony Magazine tested recipes for its iconic ‘Date with a Dish’ column, from oyster gumbo to sweet potato pudding.

Run by the first and only African American food editor at a major magazine, Ebony celebrated and helped popularize African American food as American food.  The kitchen was almost destroyed when its space in the Johnson Publishing Company in Chicago, was to be turned into housing.  MOFAD won a competitive bid for the kitchen, preserving this piece of classic African Americana– and hopes to take it on tour to centres of African American life across the country, from Washington, D.C. and Philadelphia to New Orleans and Memphis.

Legendary musician and tastemaker Questlove has curated the music for the kitchen, while videos of Ebony editors talking about the kitchen give visitors a more profound first-person understanding of its cultural importance.

This multi-sensory exhibition also provides visitors with the chance to break bread together. As part of African/American, Chef Carla Hall, chef and television personality, has curated a tasting inspired by the story of the “shoebox lunch”. During the Great Migration, many African American travellers were refused food service in hospitality venues. They would pack shoeboxes with food as the only certain source of sustenance for the trip. MOFAD’s tasting uses the shoebox lunch as a symbol of culture, connection, and the spread of African American culinary identity across the country.

Contributors to the shoebox tasting menus include Chris Scott, instructor at the Institute of Culinary Education; Adrienne Cheatham, formerly executive chef at Red Rooster; Tanya Holland, owner of Brown Sugar restaurant in San Francisco; and Edouardo Jordan of JuneBaby, Seattle, known for his Black Southern dishes; and Kwame Onwuachi, until recently executive chef at Kith and Kin in Washington DC.

For more information visit the website of the Museum of Food and Drink.