Culinary Diplomacy – food, drink and hospitality as catalysts for progressive change in society

The US Embassy in London and the Oxford Cultural Collective are working together to deliver a programme of Culinary Diplomacy, exploring the role of food and drink professionals in achieving positive social and cultural change.

Through a series of creative events, the initiative introduces guests to renowned cultural ambassadors – those working in food and drink, including writers, chefs and activists, who are making significant and progressive contributions to American society in fields including race equality, embedding social cohesion, tackling the climate emergency and post-covid recovery.

The third event in the series, attended by around eighty guests, took place on 13th April in the Academy restaurant at Ulster University, as part of Gastronomy Summit 2022.

The lunch was hosted by Paul Narrain, Consul General to Northern Ireland and the keynote speaker was Christina Tribble, US Cultural Attaché at the US Embassy in London. Lunch was prepared by Paul Bloomfield, chef and OCC Patron, working alongside students from Ulster University. 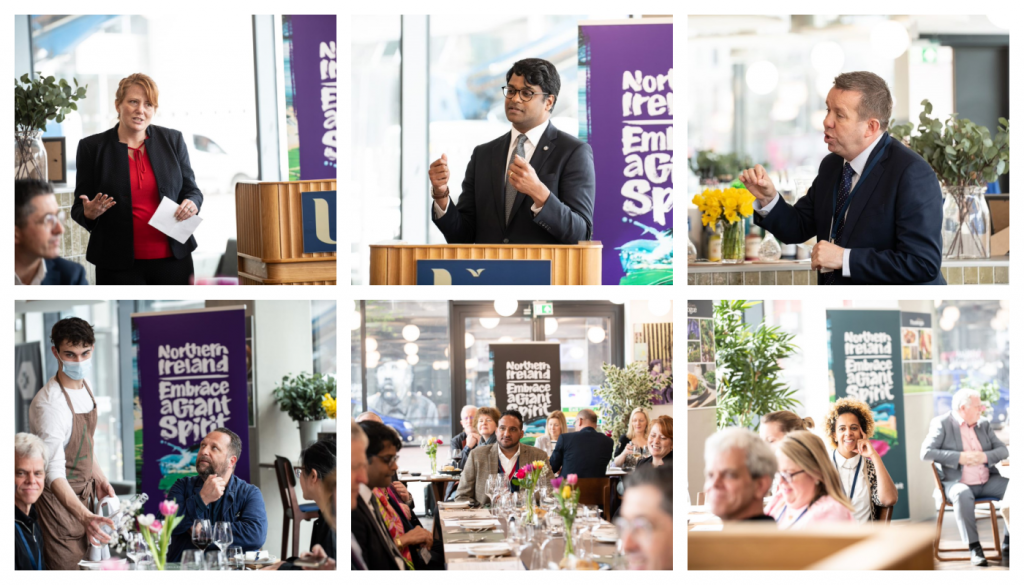 Paul Narrain addressed the process of social change that is taking place in Northern Ireland, in particular reinforcing the positive contribution of education and the role of the US Consulate General in convening conversations, encouraging meaningful dialogue and promoting cultural exchange and understanding. Christina Tribble focused more specifically on the Culinary Diplomacy programme, including how it showcases food, drink and hospitality as catalysts for achieving positive and progressive change.

It is intended that this lunch will serve as a precursor to another Culinary Diplomacy event in Belfast, which will focus on the role of civil society, including food, drink and hospitality professionals, in changing the lived reality and international image of places that have historically been defined by conflict.

Chef Paul Bloomfield of the Oxford Cultural Collective, working with culinary arts management students from Ulster University, prepared lunch that reflected OCC’s strong connections with New Orleans, a relationship that has been steered by OCC Patron Dr Jessica B. Harris.

Our host – Paul Narain, US Consul General to Northern Ireland

Christina Tribble has served 18 years as a US diplomat, with tours in Haiti, Cuba, and Pakistan prior to London. She led the Department’s cultural affairs training program for three years and helped develop many of their early social media strategies as the world learned how to use Twitter, Facebook, and similar tools to engage people.  Originally from California, before joining the Foreign Service, she was a mediator in New York, a Peace Corps Volunteer in West Africa and an English teacher in Japan.