Vintage postcards from the African world – a new book from Jessica B. Harris 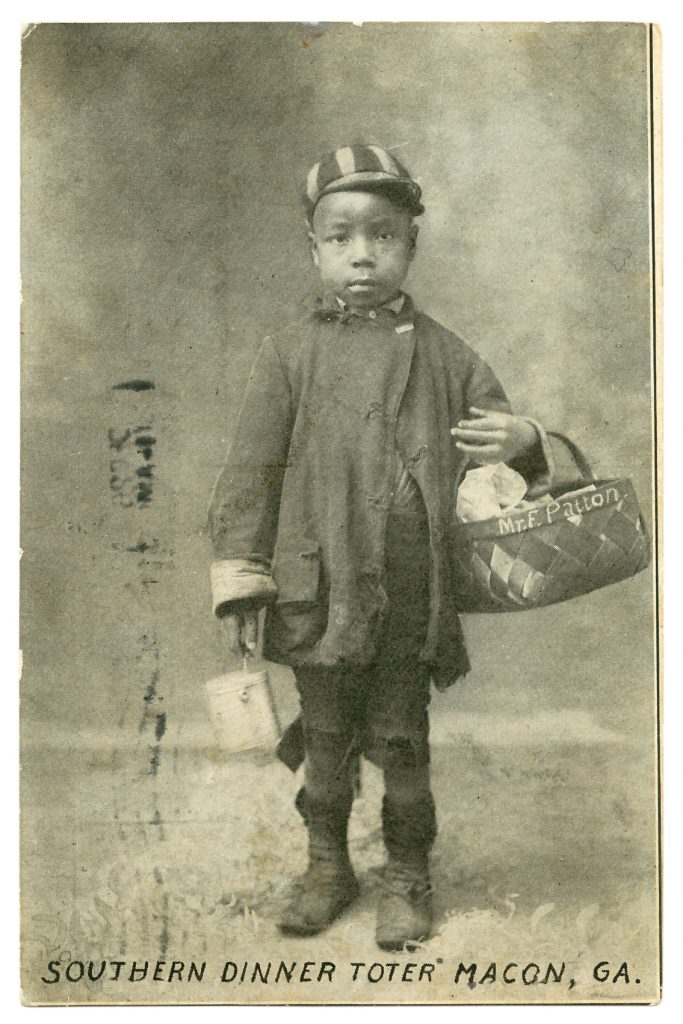 Vintage Postcards from the African World: In the Dignity of Their Work and the Joy of Their Play, the latest book from Jessica B. Harris, culinary historian and founding Patron of the Oxford Cultural Collective, was published in the US on 15th May 2020 (its release date in the UK is 30th May).

Jessica’s fascination with postcards began during her first visit to Europe in 1963. Like so many tourists, she gathered images of iconic cultural sites, many to send back to friends and family in New York.  Collecting in earnest began in the early 1970s whilst working on her doctoral thesis on the French-speaking theatre of Senegal. Travelling in the West African nation Jessica discovered postcards that presented a vivid photographic history of local people.

Of course, postcards are designed to be sent home, so those depicting West African themes are most likely to be found in European capitals – the cities of colonialists. Jessica’s quest led her to the flea markets, antique shops and grand auction houses of Paris, Brussels and London.

The collection has grown to include scenes from the Caribbean and the United States, yet it maintains a unifying focus: Africans and their descendants in diaspora. Many of the postcards are connected to food – its production, preparation and role in religious and cultural festivals.

When choosing postcards, Jessica is drawn to those that capture something distinct – ‘a look, a style, a manner, a moment frozen in time.’ She finds herself returning to the same questions again and again: ‘What is the thing that the postcard is trying to explain or express?‘  Occasionally this is answered in the small print, but in most cases the viewer is left to interpret.  Historical research can help to understand context, yet the images still carry mystery, which enhances their appeal.

Analysis of the postcards reveals common themes. Some clearly depict points of cultural and culinary history (peanut cultivation in Senegal being one example  – see photo, below). Many convey aspects of colonial exploitation and others, including those with posed depictions of cultural celebrations, helped to embed and perpetuate stereotyped perceptions of the people of Africa.  With respect to the US, Jessica chose not to include postcards depicting horrifying examples of racist violence. Whilst they serve an important purpose, they are not for this publication.

Some of the postcards now reside at the Smithsonian Museum of African American History and Culture in Washington DC and many have been used to illustrate Jessica’s books (including The Welcome Table: African-American Heritage Cooking; The Africa Table: Tastes of a Continent; Beyond Gumbo: Creole Fusion Food from the Atlantic Rim; and Rum Drinks: 50 Caribbean Cocktails, From Cuba Libre to Rum Daisy).

A small selection of the postcards 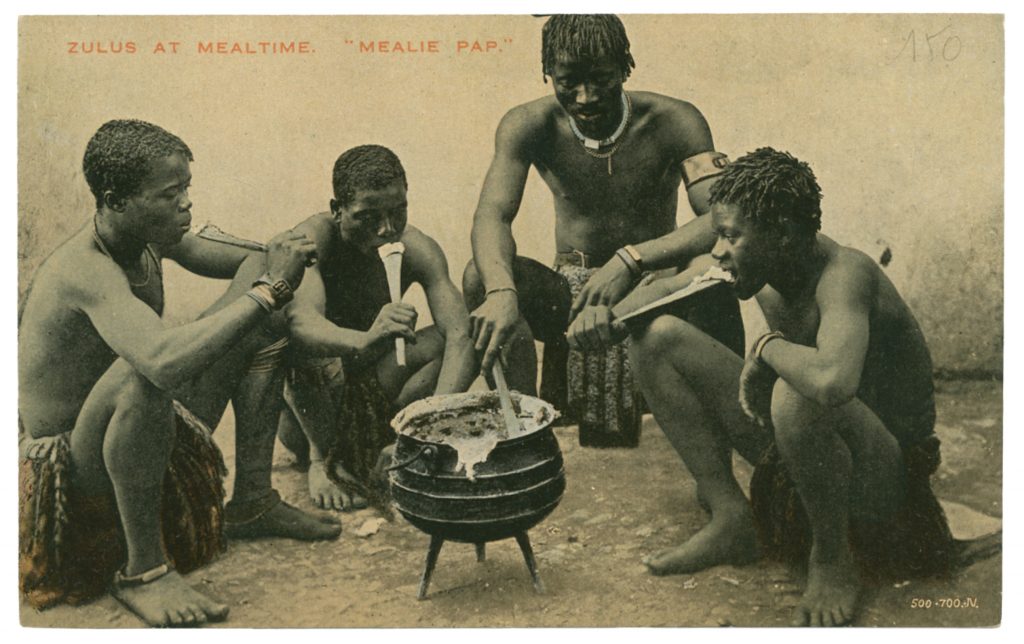 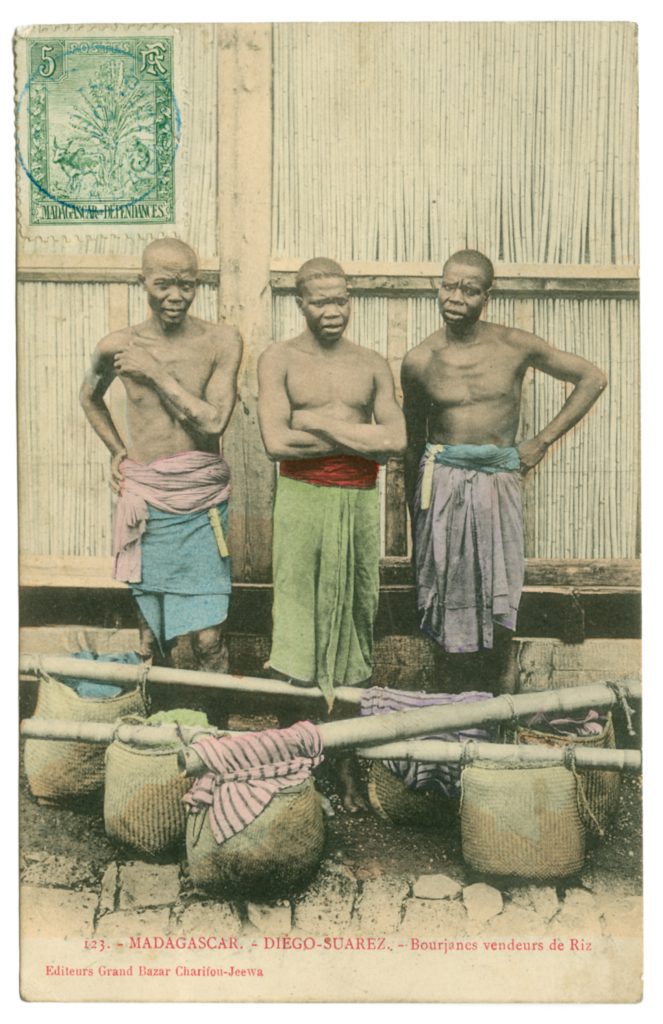 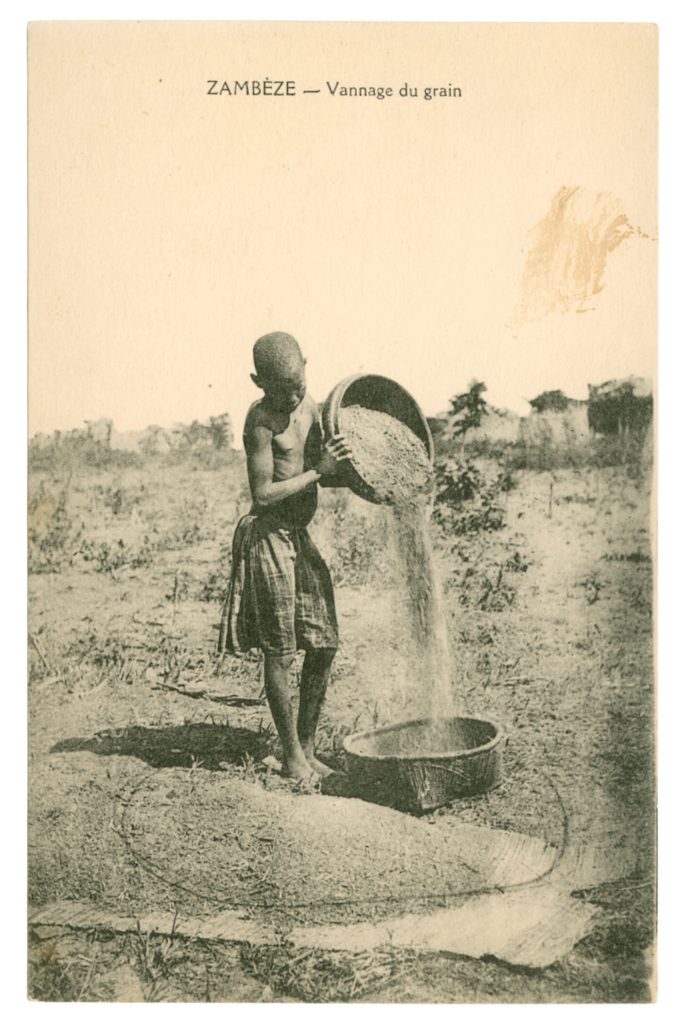 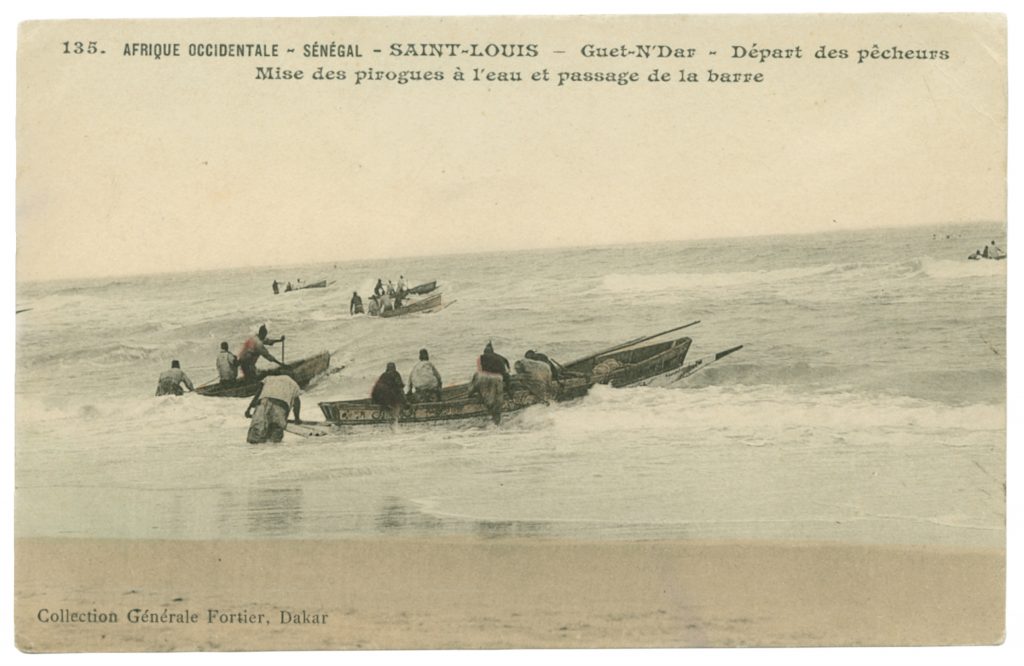 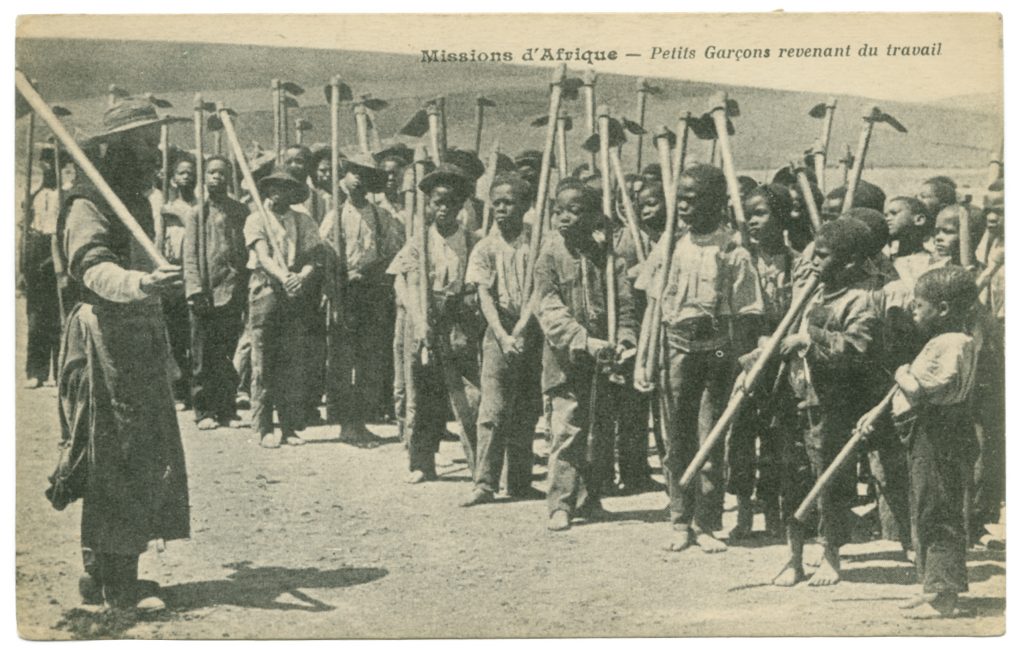 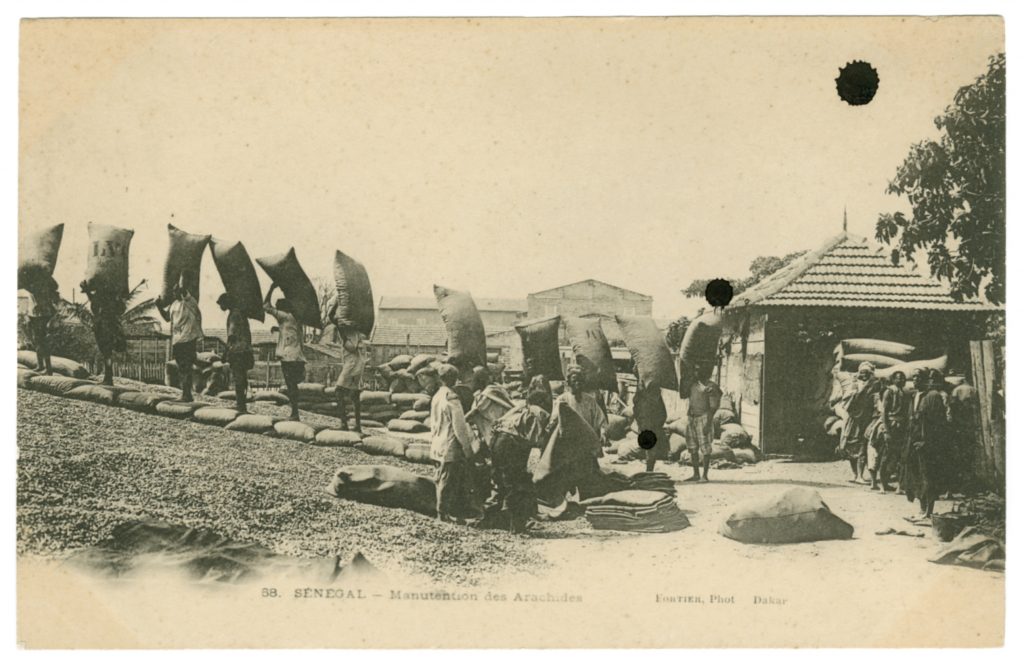 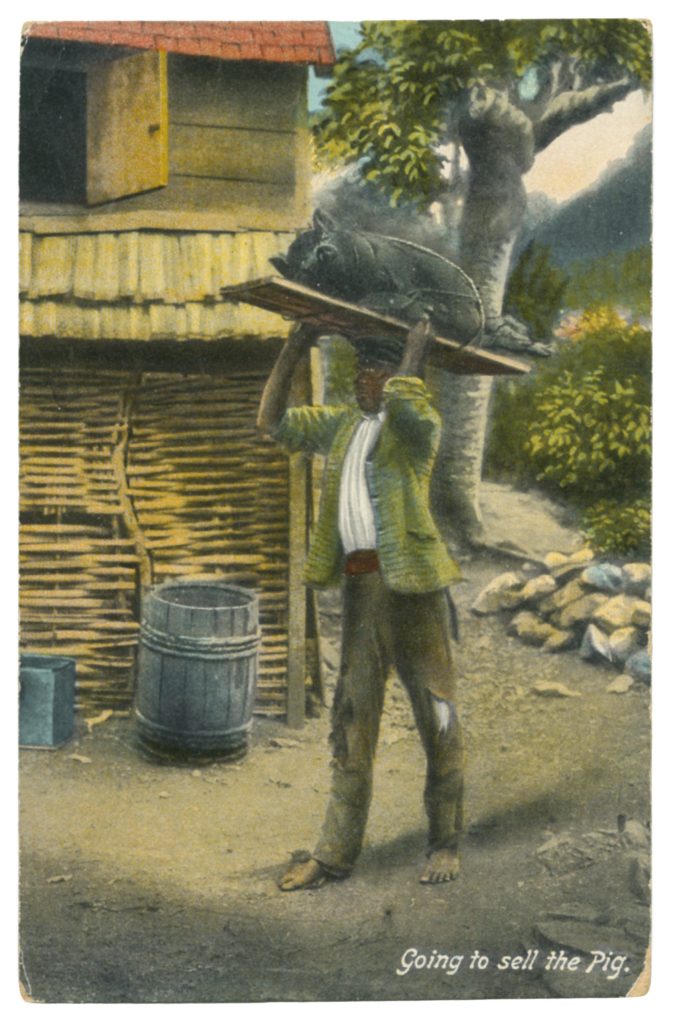 Going to sell the Pig. Back: H. G. Johnston, M. D. Brown’s Town P.O. no 16. Union Postale Universelle, Jamaica (Jamaique). “Leaving today for the rest of the island. Don’t expect much mail. Hope the heat in Phila. Is not too much for you. The pig in the picture might resemble my appetite. Mildred.” [In different handwriting]: “I think there will be a famine in Jamaica because Mildred has eaten almost all the food. Everything is O. K. M.A.P. t-4138. (Divided Back. Mailed 1913.) 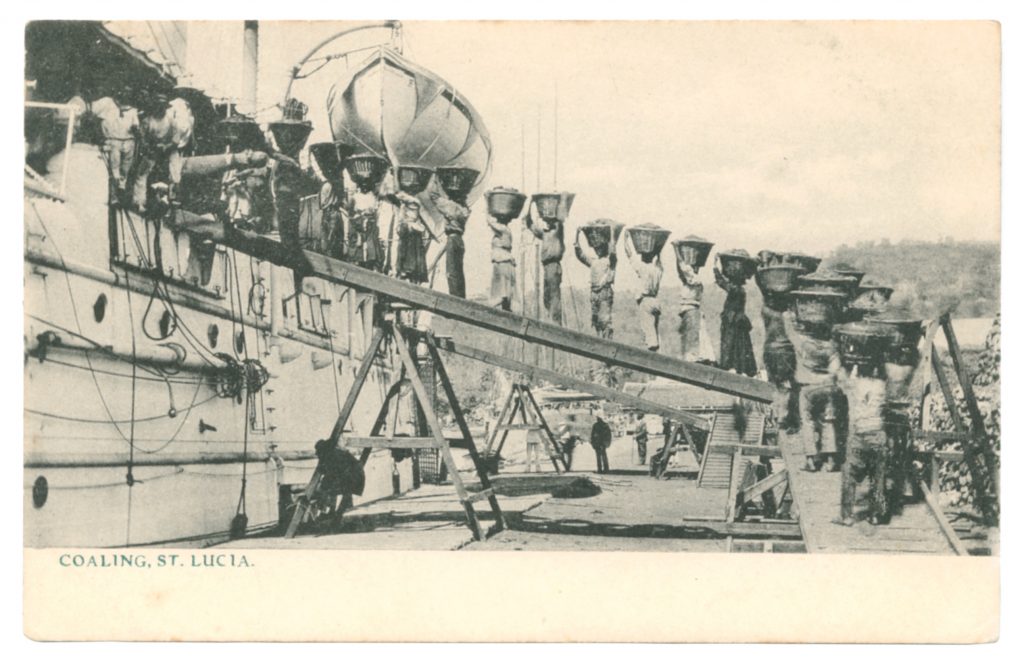 Coaling, St. Lucia. Back: This side may have a message written upon it for Postage the British Isles Only: The right hand side must be reserved for stamp and address. Transitional. (Divided Back.) 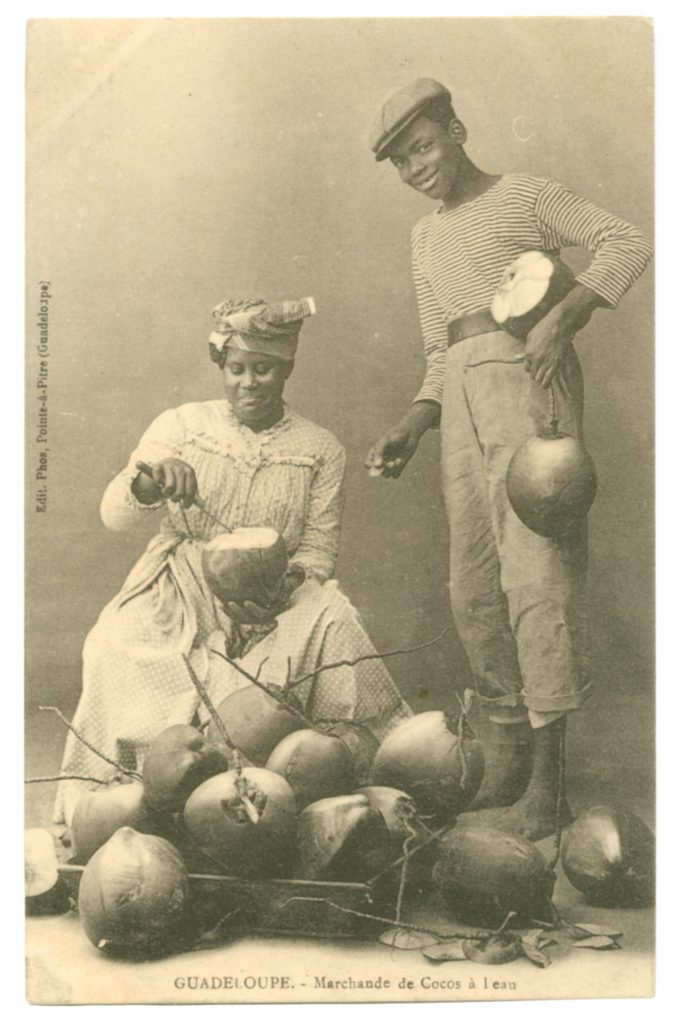 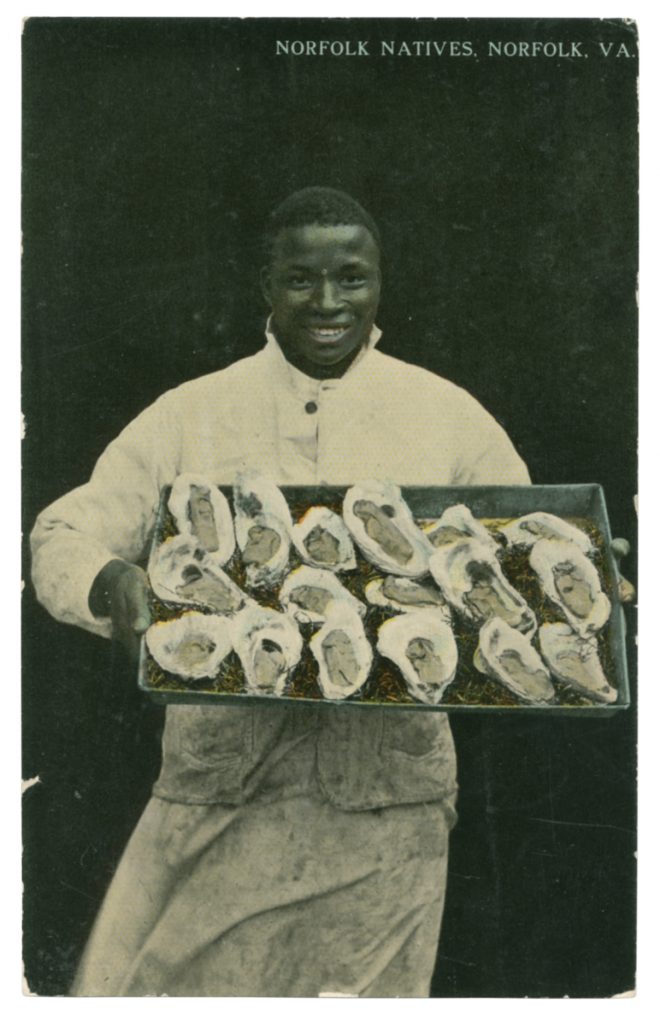 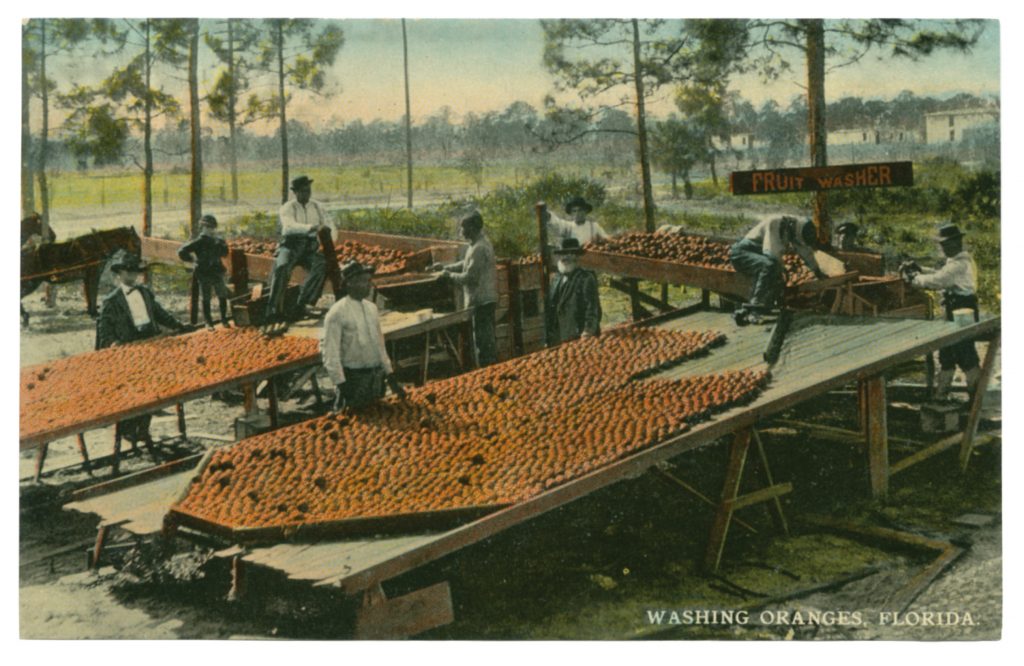