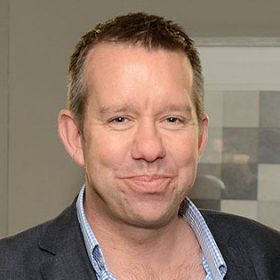 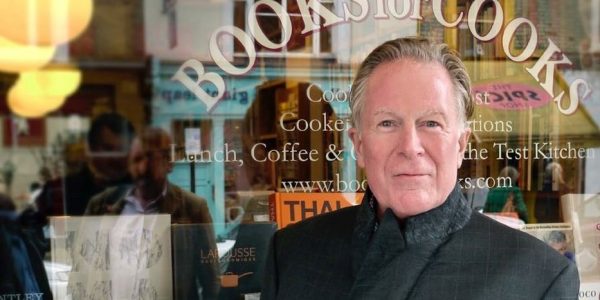 Jeremiah Tower began his culinary career in 1972 at the acclaimed Chez Panisse in Berkeley, from where he became a key player in the emerging Californian cuisine movement.  In 1984 he launched Stars restaurant in San Francisco, which was an immediate success.   Jeremiah secured his position as the ‘father’ of modern American cuisine and the country’s first celebrity chef.

After building his restaurant empire to include sites in Hong Kong and Singapore, Jeremiah took the unexpected decision to give it all up, to move first to Manila and soon after to Mexico, where he lived in relative obscurity until 2014.

In recent years, led in large part by the success of The Last Magnificent, Anthony Bourdain’s biographical documentary, Jeremiah is returning to international prominence. In 2016 he published Table Manners: How to Behave in the Modern World and Why Bother, soon followed by a new and even more revealing version of his memoir, Start the Fire: How I began a Food Revolution in America. 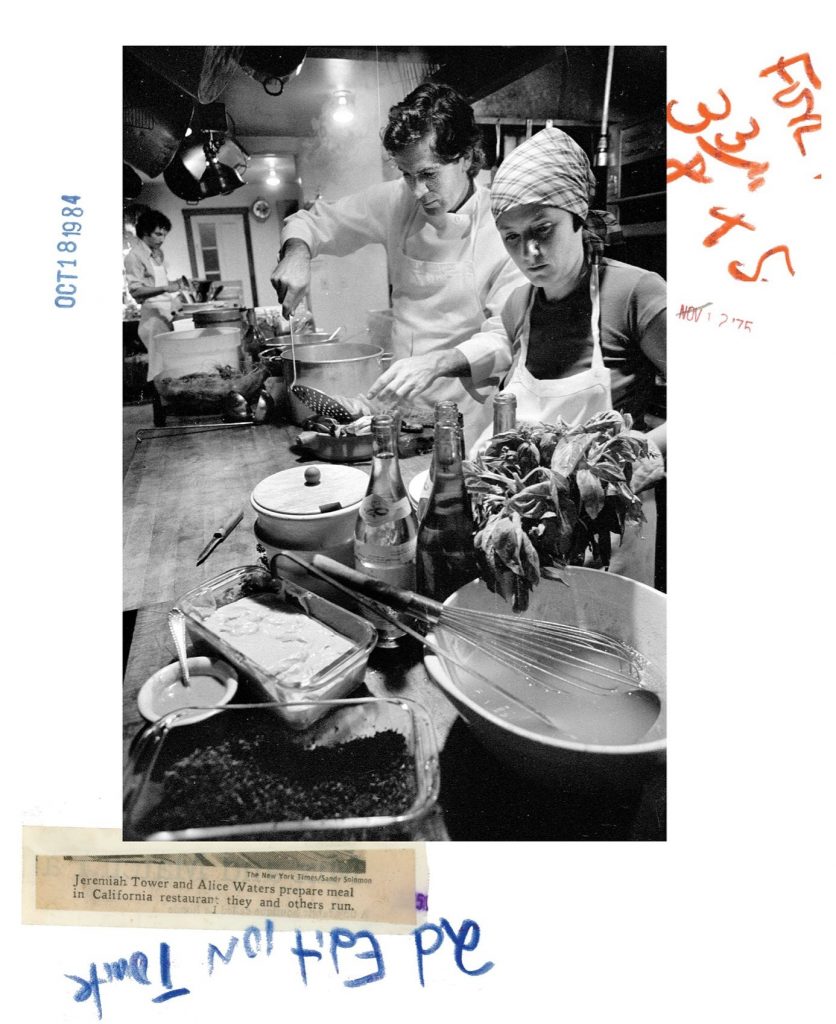 In 1972, aged 30, Jeremiah travelled west to California with no set plans for the next stage of his life. Through financial necessity, rather than by design, he applied for the position of Head Chef at Chez Panisse, a small, relatively unknown restaurant in Berkeley. If he could secure the position, and stick at it for a couple of months, he could save some money then possibly head on to Hawaii.

Of course he got the job, and so began his working relationship with Alice Waters – a relationship that would revolutionise American cooking. Within a year he became an equal partner in the business and together they championed a new form of Californian cuisine, using local ingredients and drawing on cooking techniques they had mastered through their experiences in France.

Despite their unprecedented, positive impact, Jeremiah and Alice’s relationship became characterised by its volatility. That is what makes this photograph so special – to see two masters of their craft working in harmony.

Sharon Bacon, formerly a waitress at Chez Panisse and later assistant to Jeremiah, commented: “They were always bickering – but when it all came together they had an extraordinary synergy”.

For Jeremiah, “this photograph is a wonderful reminder of what we had in common, which we must celebrate”. 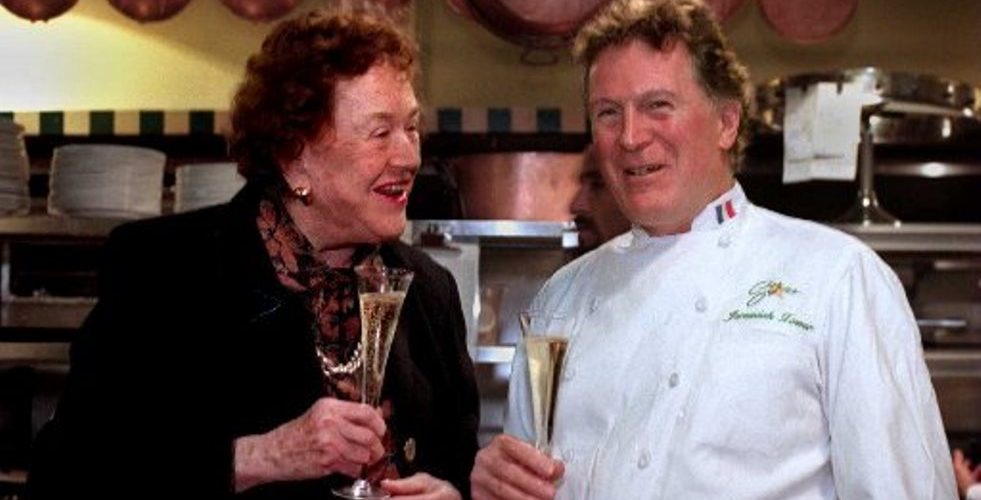 Jeremiah Tower with Julia Child in the kitchen at Stars

Jeremiah first met Julia Child in the early 1970s whilst he was still an architecture student at Harvard. He had often seen her at Savenor’s market in Cambridge, Boston, but had never introduced himself. On one occasion, whilst he was remonstrating with the butcher for trying to pass off frozen beef as fresh, she came to his rescue. He heard that unmistakeable, high-pitched voice ring out from behind him in the queue: “The young man is correct – that meat has been frozen.” The stallholder, clearly terrified of Julia, replaced the beef and, from that day on, treated Jeremiah impeccably.

Jeremiah could not have predicted that this would be the beginning of a warm, lasting friendship and that three decades later he would be hosting Julia’s 80th birthday party at Stars.

Whilst Julia Child did not visit Chez Panisse, she did become a regular at Stars. For Jeremiah, it meant a great deal to have the support of the country’s most popular television cook: “You have to remember the weight of Julia’s influence. Whilst Mastering the Art of French Cookery was a best seller, it was through television that she connected with the nation. On TV she was warm, funny, approachable and educational – and she did more than anyone else to rekindle the popularity of home cooking.”

Julia’s prodigious appetite for life and her considerable stamina were something to be admired: “I remember one late evening after an event in Sacramento, Julia insisted on staying up for night-caps.  At around 2am, as we said our farewells, she reminded me that we’d be having breakfast. I struggled out of bed at 7am the next morning to find Julia in the hotel restaurant, spritely and upbeat as ever, greeting me with her usual, ‘Hello deary’, enjoying a hearty plate of bacon, sausages, eggs and scones.”

What Jeremiah recalls most fondly is how natural and at ease they felt in each other’s company. Looking back at this photo, taken in the late 1980s in the kitchen at Stars, he comments: “I can’t remember this actual moment, but I suspect I’ve just said something irreverent. She has a look on her face that says ‘You little son-of-a……!’ “ 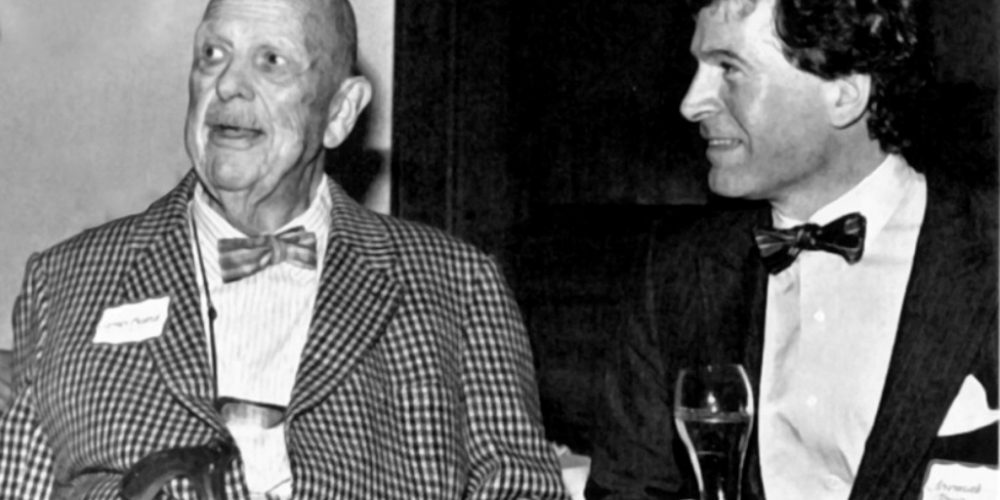 James Beard was a titan of American gastronomy. His was the country’s first TV cooking show, he opened James Beard Cooking Schools in New York City and Seaside, Oregon, and published many best-selling cookbooks. His legacy lives on through the James Beard Foundation, which provides scholarships to aspiring food professionals and presents his eponymous awards – the most prestigious of their type for chefs, writers and broadcasters.

Beard had a profound influence on Jeremiah’s career. Singing the praises of Chez Panisse, providing informal mentoring support and helping with the conceptualisation of Stars, he was a constant presence in Jeremiah’s life.

Looking back at this photograph: “I seem to be looking at him very fondly, not only because I’d had plenty of champagne. I’m also wearing a bow tie, which I suspect was in his honour: it was part of his signature attire.

“James probably did more than anyone else to shape my career and success. In 1974 he wrote in his newspaper column, which was syndicated to around 50 other publications, that Chez Panisse was one of his favourite restaurants in America. The others were established places like the Four Seasons and the Coach House, both in New York. Of course his words ensured that Chez Panisse took off, press coverage was constant and our reputation was sealed.” 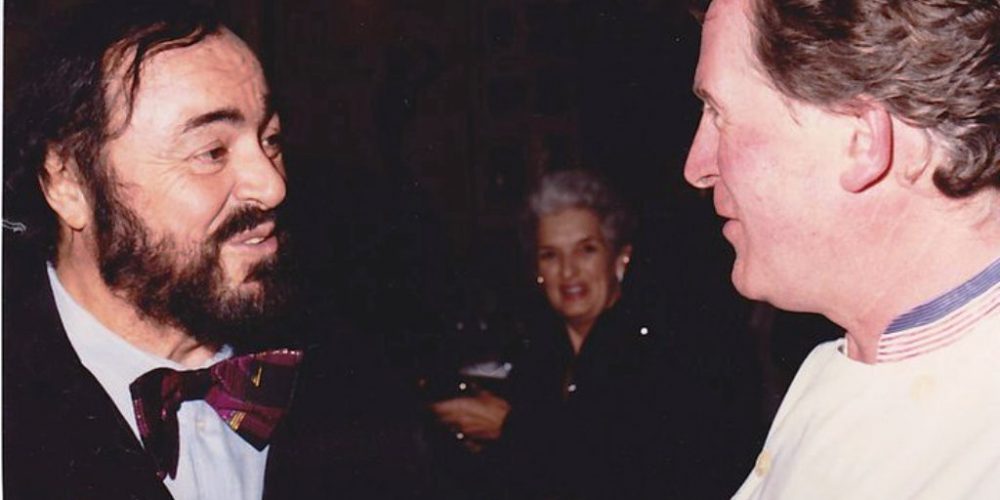 Stars ushered in a new form of highly conspicuous consumption. As important as the food was Jeremiah’s role as the convivial and ever-present host and the patronage of leading celebrities, ensuring constant press coverage. Endless opportunity for hobnobbing with the wealthy, famous and powerful was a large part of Stars’ appeal.

Jeremiah recalls: “Building relationships with celebrities was a conscious strategy. Chez Panisse got huge press coverage, but I’m not sure we understood the power of the press. At Stars, I made a full blown effort to attract the leading lights of dance, music, theatre, film, television and politics to dine with us. I realised its power, and it paid off.”

A regular guest, who had been introduced by the prominent socialite Denise Hale, was the world-renowned opera singer, Luciano Pavarotti. He would come to Stars late each evening when he was in town performing at the Opera House.

“His arrival always caused a stir”, remembers Jeremiah. “He would always begin by asking me for a table where there were no drafts. He was obsessed with avoiding drafts. I would then sit at his table, tie four knots in the corners of a napkin and, in the style of English men on beaches in the 1970s, place it on Pavarotti’s head – all in the pursuit of fending off the drafts.

“The other guests in the restaurant would be transfixed. When asked why I was placing a napkin on the head of one of the world’s most famous men, I’d simply say ‘What Pavarotti wants, Pavarotti gets’.

“He came to trust me. He would invite me back-stage when he was working, which I found fascinating. I got a glimpse of what it was like to live with that level of fame – but I also saw him in his quiet moments, slumped on a chair in his dressing room, seemingly depressed, before going back on stage.

“Luciano was always on a diet, but when he came to Stars he would be unrestrained and eat copious amounts of ice-cream. I would even sneak ice-cream to him back-stage. I remember one occasion, when he was in a café scene, he was eating half a gallon of my ice-cream on-stage.” 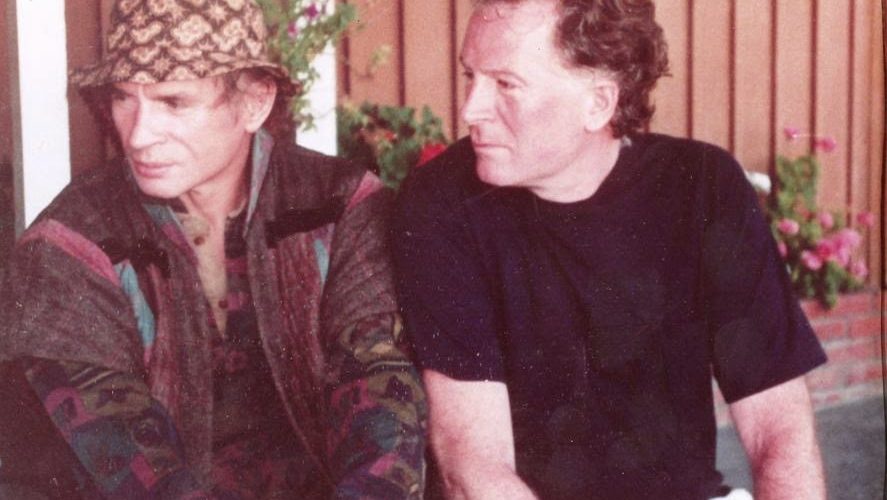 One of Jeremiah’s longest-lasting friendships was with Rudolph Nureyev, widely regarded as the leading ballet dancer of his generation, who defected in 1961 from the Soviet Union to Paris. They first met during Jeremiah’s time as a student at Harvard. He had already got to know Margot Fonteyne, the British Prima Ballerina, who was appearing with Nureyev in Sleeping Beauty in 1972 at the Boston Opera House.

“Margot encouraged me to call Rudy, which of course I did. I went to meet him at the Ritz Carlton, and straight away we bonded.”

This photograph was taken more than twenty years later, after Nureyev’s ballet career had come to an end. “He was appearing in Rogers and Hammerstein’s The King and I, in San Francisco.  He called me one afternoon and asked if we could get out of town.  We drove to Calistoga in the Napa Valley. You can see that we are both looking to the right – actually to someone who is asking Rudy for an autograph.  There was no escape, but he was always graceful.

“I have many happy memories of our times together. He loved the theatricality of Stars, and he certainly added to it.  When he was in town there would always be a huge number of visitors who would come to the restaurant in anticipation of seeing Rudy.  On one memorable night he arrived, ran over to me, picked me up and whirled me around like I was a ballet dancer.  Not many can say they have danced with Rudolph Nureyev!

“Rudy kept performing long after he had lost the ability to dance. The power of the ovation was too great. It was like a drug that he couldn’t give up. In this respect he taught me an important lesson – that I should learn when to bow out. Your last performance should never be at 50%.

“This greatly influenced my decision to close Stars in 1999 and subsequently to move to Manila and later to Mexico.

“But I’m luckier than most.  Having bowed out once, I’m definitely back on stage – and appearing in another successful performance!”