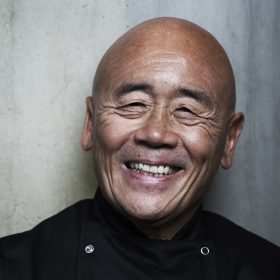 Ken Hom OBE is the man who showed the British how to cook Asian food. A leading authority on Chinese cuisine, he is one of the most respected and celebrated TV chefs of all time. His phenomenal success is easily measured. He is the author of almost forty books, which have inspired millions of home cooks around the world. And in Britain alone, the Ken Hom wok is in one in seven kitchens.  Ken resides in France and in Thailand but travels tirelessly all over the world, continues to appear regularly as celebrity chef, writes new books and keeps an involvement with restaurants worldwide.

Ken was born in 1949 in Tucson, Arizona, where his Cantonese parents had emigrated. After losing his father when he was just eight months old, his mother moved to Chicago to be with relatives. As Ken grew up, he found American food unpalatable compared to his mother’s cooking so she sent him to school with a flask of hot rice and stir-fried vegetables.

To pay for his university fees he started to give cookery lessons and quickly realised that this was where his heart really lay – especially with his native Chinese cuisine.

A major national profile on him, published in the New York Times in 1981, led to the publication of his first book, Chinese Cookery Techniques, to much acclaim. In 1983 came his first BBC television series, Ken Hom’s Chinese Cookery, which bore the same title as the book accompanying the series.

Ken went on to publish another 36 books and present 5 hugely successful television series.  His most recent book is his autobiography , My Stir Fried Life, released at the end of September 2016. The book provides a high-spirited, life-enriching insight into ken’s fascinating career.

2016 marked the 30th anniversary of the Ken Hom Wok, the iconic piece of cookware which epitomises Ken’s style of cooking. It has sold 8 million units in 70 countries, of which 5.43 million in the UK.

His 92-seat MEE restaurant located within the Belmond’s Copacabana Palace in Rio de Janeiro, Brazil, is the city’s first luxury pan-Asian restaurant,  awarded with one Michelin star in 2015, less than 12 months since opening and has retained its star for 2016.