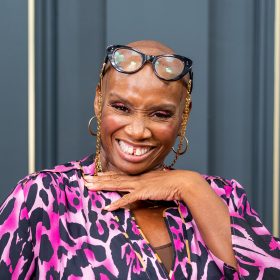 Andi Oliver, one of the UK’s most well-known and best loved broadcasters, is host of the BBC’s Great British Menu, a lead presenter on Food Unwrapped, a regular contributor to the BBC’s Saturday Kitchen Live and is host of Sky Arts Book Club. In a recent production for BBC2, The Caribbean with Andi and Miquita, Andi and her daughter embarked on a journey to explore their heritage, with visits to Antigua, Barbuda and Barbados.

Andi’s first cookbook, Pepperpot Diaries: Tales From My Caribbean Table, is due for publication in April 2023. Showcasing traditional and modern dishes and distinctive local ingredients, it will reveal the flavours of Andi’s childhood and track how Caribbean cuisine has evolved over time.

Andi has enjoyed a rich and varied career, built primarily around music and food. She rose to fame in the early 80s fronting the band Rip Rig with Neneh Cherry, before becoming a tv broadcaster. She presented the cult show Baadas TV with Ice T, the award-winning documentary Crazy Sexy Cool, the food show Neneh and Andi Dish It Up (with Neneh Cherry) and for six years she covered Glastonbury and other festivals for the BBC. In addition to her current headline tv roles she is a regular panel member on The Kitchen Cabinet with Jay Rayner and contributes to The Food Programme, both for BBC Radio 4.

She appeared in a gala performance of The Vagina Monologues at the Royal Albert Hall alongside Isabella Rossellini, Maureen Lipman and Meera Syal, which led to a three-month West End run with Michelle Gomez. She also appeared in the first series of The Number One Ladies Detective Agency.

Throughout all of this, Andi has continued to strengthen her culinary skills. For four years she ran a successful ephemeral restaurant, The Moveable Feast. After being creative director of The Birdcage pub on London’s Colombia road, she launched her own restaurant at The Jackdaw and Star, a renovated pub in the heart of Homerton. She opened her award-winning restaurant, Andi’s, in 2016, and in 2020 created her newest food project entitled Wadadli Kitchen, through which she celebrates real Caribbean home cooking.